I learned this phrase from one of my best friends while staying in her home earlier this year. I don’t think it needs much explanation, but I’ll share how she used it with her boys.

One of my friend’s sons is “high justice” — when he sees something unfair, discriminatory or simply unjust, he acts! He tries to set things right.

But sometimes he goes about it in the wrong way.

If I recall correctly, that particular week, another child was being picked on at school. My friend’s sweet boy couldn’t stand to see the injustice and took matters into his own hands and got into a little tussle with the bully.

He did the right thing — acting against injustice, but he went about it the wrong way.

I love this phrase because it affirms the child and what was done right. We should stand up for those who are being picked on. My friend’s son did the right thing — but he went about it the wrong way.

Together they talked about what would have been a better response and how he could respond if a similar situation occurred.

You’re doing the right thing the wrong way. How could we handle this differently?

The concept doesn’t apply just to kids who are “high justice.” Just yesterday, I had a you’re doing the right thing the wrong way moment with my boys. While playing outside at the nature center, I looked over to see my Jack earnestly pushing his little brother. Will, of course, was screeching in protest.

Come to find out, Jack wasn’t pushing to be mean. Rather, he was on “goose poop patrol” and was trying to keep his little brother safe! This was a great example of doing the right thing — watching out for his brother — but doing it the wrong way — pushing him over.

You’re doing the right thing the wrong way. What’s a better way to help your brother?

Doing the right thing the wrong way seems to come naturally to us as parents, too, doesn’t it? How often our zeal impairs our judgement and we act on emotion instead of what God’s Word tells us is true!

I was reminded of this when reading through 2 Samuel 6.  King David and the people were attempting to bring the ark of God to Jerusalem, which was to be where the people of Israel would come and worship God. What they were trying to do was good and right. However, they were going about it the wrong way. They didn’t carry the ark the way God had prescribed. They didn’t treat the ark the way God had commanded.

In their zeal, they didn’t wait for the Lord’s timing and move the ark according to God’s way!

It is easy to get caught up in emotion or enthusiasm. We, too, might do the right things, with all sincerity, but do them in the wrong way!

To be truthful, sometimes I’m afraid that I’ll continue doing things the wrong way. But as I’ve brought this care before the Lord, He has reminded me that He is faithful and won’t allow me to remain in sin if I am submitting to Him and seeking Him.

If you ever worry about this same thing, let me encourage you to remain in the Word of God and prayer. Remain in relationship with other believers who will help hold you accountable and watch that your heart remain teachable.

What an example, then, we will be for our kids! Not only will we model what it means to abide in Jesus and obey Him even when it feels hard, but we can show our children what it means to submit to one another out of reverence for Christ (Ephesians 5:21) and help spur one another on toward love and good deeds (Hebrews 10:24).

Question for You: Have you ever done the right thing but in the wrong way or seen your kids struggle with this? What was the situation and how did you respond?

Click here to view all of the posts in this series. 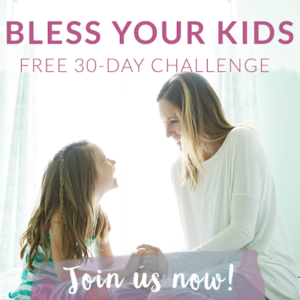 Join over 8,488+ moms who are leading their kids to Jesus and nurturing faith at home!

Get practical teaching, helpful resources, and the encouragement you've been looking for right in your inbox!

Nurturing faith + faithfulness in our hearts and homes.